If you’re here to read about the whole Jose Valverde
spitting incident, check out that post
here.

So I showed up to the park on Friday not expecting anything
exciting.  It had been pouring all day
and I already had word from a friend at the stadium that BP would for sure not
happen.  Either way, I headed down around
4:15 and stood in line.  Eventually, Tim,
Ben, Brittany, and some others showed up.
Zack Hample left town, and he
made a good choice doing so.

When we got in, there were some Rangers throwing:

I got a ball from some athletic trainer with them, then
handed it to a little Rangers fan standing by us (it was wet and dirty and
meant a LOT more to her).  Tim, Ben, and
Matt each got one (I think Matt actually got 2) as well.

The Orioles came out to throw

But I didn’t really bother asking for things.  What was cool was that Ronnie [Deck] finished
throwing with Arrieta, and when all the pitcher went in, he came over to talk
with me for a good ten minutes, saying he was waiting for Tillman.  We talked about everything from his uniform
to Spring Training to everything else random you can imagine. That was pretty
cool.

I then spent time with some people in Café 54, by the
bullpen, and on club level (including putting high socks on, my original pair
were *soaked*). 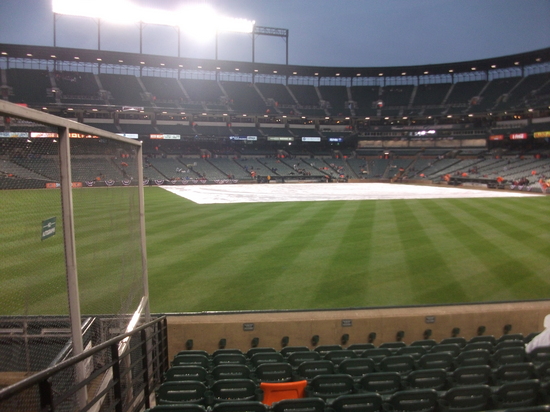 We heard at one
point that there were some Rangers sliding on the tarp, including Josh
Hamilton.  From club level, we ran out to
see it, but missed them.  You can see
videos of it here (this one is taken by the Rangers bullpen catcher in the dugout), here,
and here.

The game was postponed, it was announced that there would be
a straight doubleheader the next day, so I called up Todd Cook who would be
coming to town, and headed back to my place.

Oh, and I got Darren Oliver’s autograph:

So I got down to the Orioles doubleheader on Saturday around
2.  The gate times were confusing, Zevi
and I ended up having to run around the stadium when nobody else did… it was
just bad.

There were a ton of balls in the stands, and Matt found like
5.  I found one.  Then caught a Mike Napoli HR during BP on the
fly.  But that was it for me.  And I must have given both away, because I
have no idea where they are at this point.
Sometimes I just hand them off when I get them if they are too dirty to
get signed and have nothing interesting that I would want to keep them for, so
I assume that is the case.

Here’s a shot I took during BP: 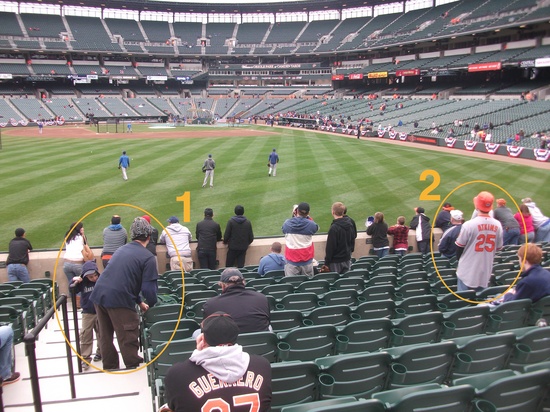 In this one, we have:

For sure click on the Cooks name there to check out their
blog.  I met Todd and Tim last season,
and have stayed in touch with Todd ever since for baseball stuff, and I
currently serve as his Oriole Park ticket broker.  More on those two later.

Here is a panorama he took after BP but before the first game.  I’m in it there tossing my glove.  I was trying to toss it into his picture, but you can’t tell that here since I had no idea he was doing a wide lens panorama.  Either way, pretty cool. (click to enlarge as usual)

So Zach Britton was starting for the Orioles: 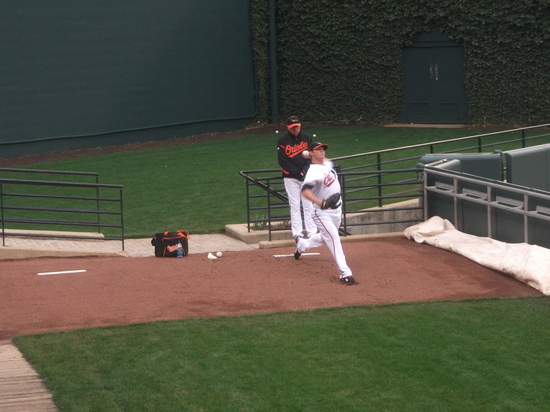 During the game, I hung out with Kris, Zevi (I’m not linking him every time I mention his name,
sorry), Andrew, and some others I’m
sure (I just am forgetful).  It was fun.

Yes, I did facepalm during this game.  Here’s
the video if you must.  There’s a bit
of a background story to my frustrations behind it, but I’m not going to openly
start attacking people on here.  But
yeah.  I shredded both of my knees, my
right one the most, and was bleeding all over my legs.  It wasn’t pretty.  But we fight on.  And it was weird because the pitch before the
home run, I said to somebody “let’s see if Reynolds can make Earl Weaver happy
with a 3 run home run” and BAM.

So then there was a short break between games, but we
settled back into section 86 for the second game.  This time, Todd and Tim Cook, who had been
busy and exploring during game one, spent most of game two with us.  Tim, I must say, is a very energetic a funny
little guy.  Tells some great jokes.  And Todd talked with me/us for most of the 2nd
game, about all things baseball really.
There were multiple innings where I don’t remember what really happened
since we were having some fun talks.
Baseball is finally back.

The Orioles got crushed in this game by the score of
1-13.  Yeah, the Rangers flat out mashed
(including another Nelson Cruz home run).
Arrieta was off his game, but it could have been because of Jake Fox
catching.  Who knows.  Though Fox looked awesome with his retro bird
helmet plus the black uni:

So yeah.  Was an
interesting day, spent a ton of it just relaxing around talking to people
watching a game, and didn’t go too crazy with things.  Then I went on Sunday (post coming soon), and
that’s that.

Oh, and I’m still holding Adam Jones to this.  But it was cool just
yesterday when I told him he should
visit the MLB Fan Cave, and he replied that
he already was going.  Then MLB put up
this video of it.  Ryan Wagner, one of
the cave dwellers, is an O’s fan.  He’s
pretty darn cool.  I enjoy following the shenanigans
of the MLB Dream Job here, and you should, too.

Oh yeah, and be sure to check out the flyer and info for the May 8th Orioles game fundraiser!

And in case you don’t know, both Nolan Reimold and Manny Machado are owning their respective minor league leagues (that sounds funny).